Have you checked out our YouTube channel lately? Stuff be blowin’ up over there. We’ve released three episodes of our new After The FACT show, and so far everybody seems to really like them. So far we’ve covered Luigi’s Mansion, Mirror’s Edge and Super Mario 64. If you’ve never played any of those games, these videos will give you a great first look at what they did well and not so well. If you have played them, then get ready for a big ol’ dose of nostalgia. That Mario 64 video reminds me of high school. Running around the ice levels while on the phone with Stacy Driver while she talks about God knows what because I was completely ignoring her because holy shit it’s Mario but in 3D. Sorry, Stacy.

Dead Space 3 (Xbox 360, PS3, PC): I guess this means I won’t be finishing Dead Space 2 before Dead Space 3 releases. I’m pretty sure I had Dead Space 2 on my shelf before I finished Dead Space. So, I guess I’m sort of keeping up the tradition. Except, I don’t plan to buy 3 any time soon, and 2 has been struggling to keep my interest the times I’ve tried to sit down to play it. I don’t know what it is. I don’t know if I’m actually not interested in the game, or if the tug of other games is too strong. Either way, I haven’t been terribly enthralled. I’m sure I’ll give Dead Space 2 another chance in the near future. Maybe after I finish my replay of Metroid Prime. You know, that game that came out in 2002.

Sly Cooper: Thieves In Time (PS3, Vita): Dylan insists this is the best release of the week. I’ve never played a Sly Cooper game. You’ll find that I pretty much say that with most things that are exclusively Sony. As I’ve mentioned, the PS3 is the first Sony console I’ve owned. So, I missed out on a lot of the old franchises. That being said, the things Dylan has told me about this series sound really fun. It sometimes seems odd for Dylan to be excited about things. So, when he’s this excited, it seems like kind of a big deal. I seems like something I should listen to.

The Elder Scrolls V: Skyrim – Dragonborn (PC): There are a handful of places I rotate between for lunch at work. One of them is Subway. I like to eat fresh on occasion. Actually, I probably go there more often than other places. There are three locations within a reasonable driving distance of my office. I usually go to the one farthest away because it reduces the chance of actually running into anybody I work with. Most of them are perfectly nice people, and I call several of them my friend. But, I see them all fucking day. Lunch is Ryan time. I’m getting way off the original point. That being, hey Subway, we need to come to some kind of fucking napkin agreement. I get the whole green movement is huge and that you want to waste as little paper as possible. But if you’re going to give me two fucking napkins, then it needs to be understood that every table will be wiped down and pristine upon my arrival. 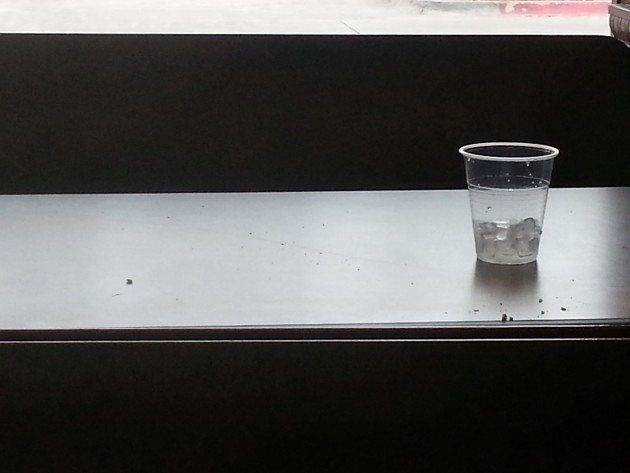 Look at that. That person has been gone for probably 20 minutes and nobody else has come in the restaurant. They’re not doing anything else. How hard would it be to come out here and run a chemical laced towel over that bad boy? The next person who sits there will likely have to burn through both of their napkins just to get the table in any kind of reasonable eating condition. Fuck you, Subway.