So PAX is just around the corner, and as a seasoned veteran of the event, I think I’m pretty qualified to tell you how to properly prepare. So with that I give you Ryan’s Completely Not Helpful Guide to PAX Prime 2011. I’ll give you all you need to know about what to bring, what to leave, and what you must see. At least, if you were me… which you’re not… hence the name.

Your PAX badge. This seems like it would be self-explanatory, but I doubt there have been zero screw-ups here in the entire history of PAX. Don’t be in that bottom 1% of people who drool on themselves every time somebody gives them the simplest of directions.

A computer or tablet of some sort. This year I’m placing full confidence in my newly purchased Samsung Galaxy Tab 10.1. It’s super light and portable. This is my first trip I’m going to take without a laptop, and I’m super curious how it’s going to go. Besides, I’ll likely be using it primarily to tweet stupid shit about how delicious some beer is. Or, about how I just spent 3 hours at the Borderlands 2 booth telling the developers how I “just like… want to hug you, man. Oh, my pants? I’m not totally sure where they went.” Which reminds me…

Apology notes. Write them out ahead of time. Your head is far more clear now than it will be in the moment. You can maybe even make some Mad Libs style notes. Just start with, “Sorry about the _________.” Then fill it in with things like:

A backpack (thank you @HarrisFoster). A backpack will likely be invaluable unless you leave it at a pizza restaurant. Good thing we were looking out for you buddy. I looked in the bag and couldn’t find the Game Scoop Game in there anywhere. Harris, have you thought about trying to sell the rights to Gearbox? Maybe they can give it that final push. Seriously though, a backpack will serve you well at an event like this. As you’re walking around you’ll likely find free stuff along with stuff you want to buy. You’re going to need a convenient place to keep it all. 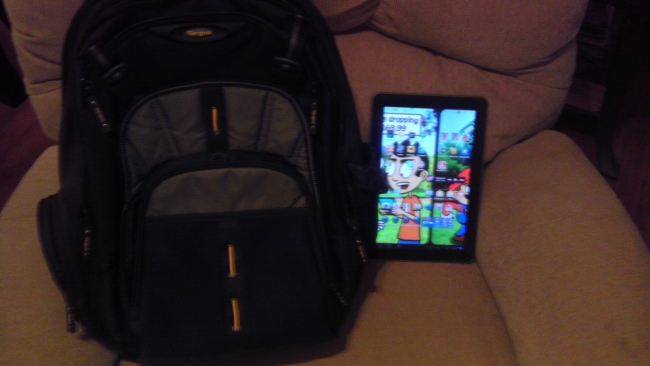 A portable gaming device (thank you @Grahaminator). Can you imagine the number of Street Pass hits you’ll get at an event like this? I haven’t touched my 3DS in over a month, but you can bet your ass it’s coming with me to Seattle. Even if I don’t know you, I’ll capture your essence. Assuming, of course, that your Mii represents this essence in any way. I imagine about 65% of the Miis I collect will just be your best attempt at Miyamoto dressed as slave Leia. However, if you actually want to bring something with games, you’ve got that Android or iPhone thing going on, right?

Your liver. This thing plays a vital role in the processing of alcohol. It detoxifies the body. Trust me, you’re going to need it for both reasons. Sure, some “doctors” and “scientists” would argue that alcohol is a toxin, but those people are stupid. I have a moderately popular podcast and webcomic. Who are you going to trust more? To prepare for the trip I have had my liver on a pretty heavy training regimen. I’ve been making sure it’s filtering plenty of alcohol at least three nights a week… since I was 21*.

* actually 19, but our lawyer (just Dylan in a nice suit) said I should say something of legal age. 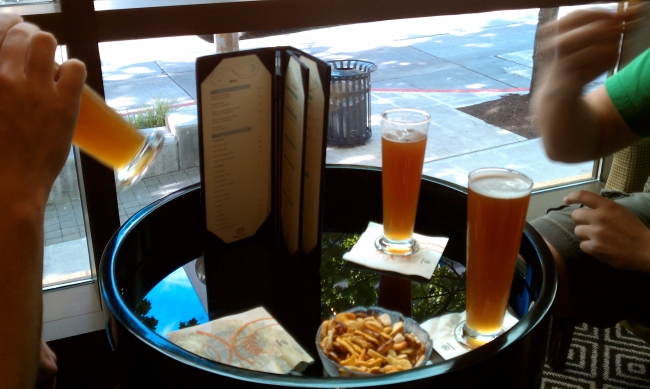 Hand sanitizer. Guys, I’m a firm believer that we coddle our immune systems too much these days. Germs are the reason phrases like, “what doesn’t kill us makes us stronger,” exist. If you’re never exposed to a few weak germs here and there, your body isn’t going to know what the fuck to do when the flu shows up. That means you die. That being said, you do not want the shit that’s floating around at PAX. This is not the weekend to start building an immune systems. Go home and lick door knobs for a week, but do not take your chances here. Along the same lines, @iamnapoleon1066 suggested cold medicine via Twitter, but my philosophy is to keep it from getting to that point to begin with. I guess safe is better than sorry. Luckily there is a convenience store within walking distance of the convention center. Those guys have always been super nice to us. The place is called Clay’s Market now. I honestly never knew the name until I looked it up just now. 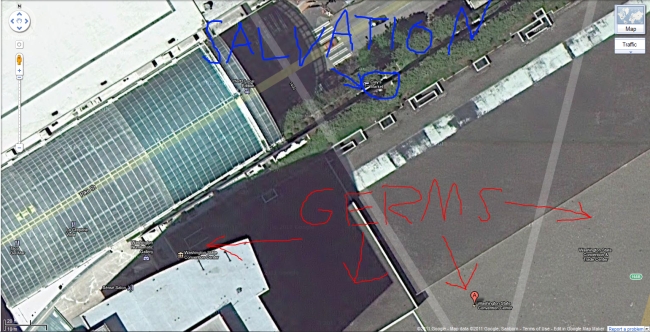 Your carry-on luggage. Don’t kid yourself into thinking you’re going to actually change clothes or bathe everyday. I will, but I fucking know how about 95% of the rest of you people operate. You don’t need that much luggage or storage space. Travel light, it’s the easiest way to go. I know this seems somewhat contradictory to the suggestion above to bring a backpack with some extra storage space for all the items you’ll buy/get for free, but I dont think you quite understand how little space one set of clothes takes up. That carry-on duffelbag will have more than enough room for your newly procured collection of hentai figurines you sick fuck.

Your dignity. Leave it at home. You’re at a giant nerd convention as it is, and I promise that you’re going to do something really stupid. I myself have a long standing tradition in which I get so stupidly intoxicated Thursday night that I can’t physically lift myself from my bed on Friday before 1 pm. I’m on vacation, DON’T JUDGE ME! At least I didn’t give a drunken lapdance to anybody. Not every contributor to this site can say the same. You gotta wait for the Supernova!

What You Should See

I’m going to name some of the heaviest hitters in this section, which means they are things you need to line up for early.

[UPDATE] Every event put on by IGN. Seriously. I’m sorry to be adding this late, but I had all the Penny Arcade stuff on the mind when I was going over panels. IGN has been nothing but great to the members of this site over the years. They also put on a Game Scoop panel. It’s just a little podcast they do. It’s always a good laugh and they typically give shit away. You like free stuff, right? Plus if Ty Root is there again, it will be 100% more ripped than any other panel you attend. This year it’s Friday at 1:30. Be there. There’s also a Meet & Greet at Gameworks that night from 6-10, but if you buy Greg Miller a few beers he’ll stick around later. Trust me. 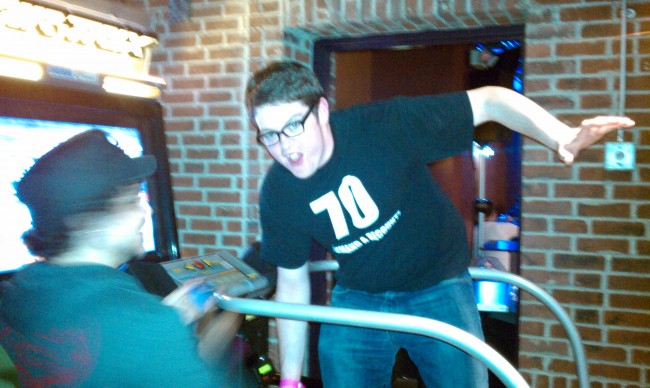 Penny Arcade Q&A panel. This is probably one of the more entertaining panels that I’ve attended. Getting to see Gabe and Tycho just kind of jack around for an hour with thousands of people making them awkwardly nervous is quite the show. I think the culture of PAX can also be truly experienced at these things. If you want to understand what’s going on, why we’re all here, this is the place to start.

Make a comic panel. I don’t think anything I say can be more convincing than this picture. It’s a dickwolf. 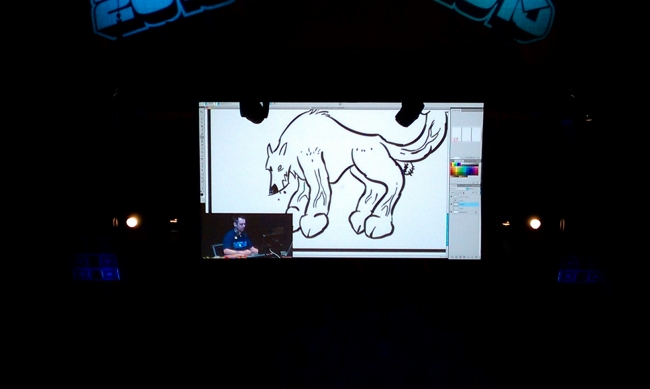 Closing ceremonies and final round of Omegathon. This is kind of a bittersweet moment at PAX. It’s the end. The culture of PAX is probably unlike that of anything you’ve been to before. You feel like you’re standing in a room with friends. So it’s a sad feeling when the show comes to a close. It’s kind of like finishing a good series of books, games, or TV show you loved. It’s that feeling of, “but wait… there could be so much more!” But at the same time, the Omegathon, a 3 day long gaming tournament between randomly selected competitors, usually ends with a bang. Last year at PAX Prime they closed it out with The Omegaclaw. Two players went head to head in the claw grabber game. It was a lot more intense than it initially sounds. I’ve never seen a room hang on the edge of every move like that. Every year delivers a great experience and I have no doubt this year will do the same. 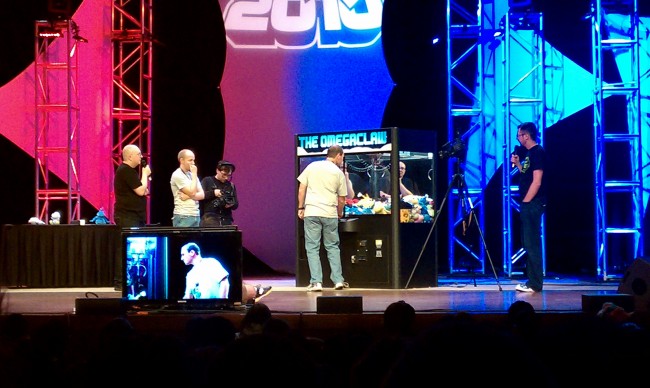 So there you have it folks. I’ll see you you all on Thursday!