While I’m not the biggest fan of Adventure Time, I more than make up for it with how much I love the character Lumpy Space Princess (LSP). She’s vapid, rude, melodramatic and everything else you’d expect from an entitled “mean girl” in high school. The twist is that she is literally made of big pink lumps and her voice happens to be that of a large bearded man. Hearing LSP talk about literally anything makes me so happy, as she is just the most ridiculous and funny characters I know.

With that in mind I didn’t hesitate to download the free iOS game that features my favorite Adventure Time character. After all, Blamburger set my expectations pretty high and I could only imagine that These Lumps would be yet another simple and addicting game to pass the time playing. Boy, was I wrong. 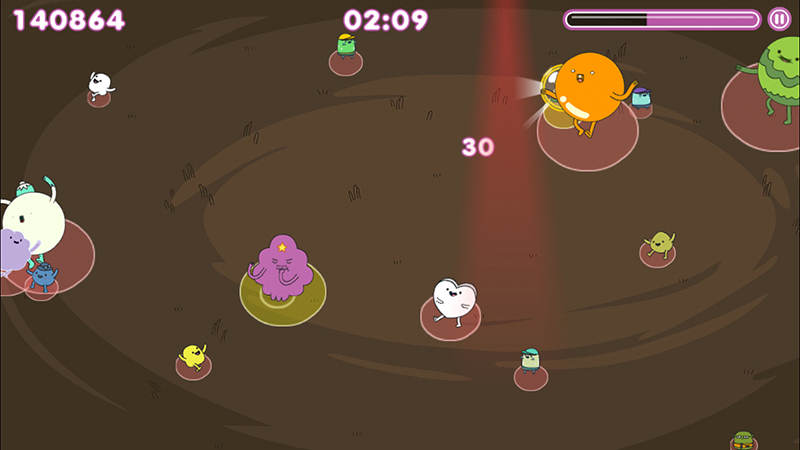 Simple is the right way to describe the game. It’s simple from the one finger you drag along the screen to play, all the way to the main hub world where you unlock random items that do absolutely nothing. Come to think of it, tapping on the items you have is the only way to hear LSP speak, which is the only reason I was excited to play this in the first place! For some reason the developers thought it was a good idea to base the game off of one of the weaker episodes in the series, in which Lumpy Space Princess kidnaps Ice King in order to force him to write more stories about the fictional gender-swapped version of her, Lumpy Space Prince. “What’s wrong with that?”, I hear you ask. Well, the issue is that male LSP is voiced by Peter Serafinowicz and for some reason he sounds like an old-timey, stuffy British guy. It’s just not very funny and I don’t get it. Why not give them the exact same voice? That would be pretty hilarious.

The game takes place in a fictional dance party in which LSP is trying to get all of the attention by slamming into people with smaller spotlights than she has. You drag your finger along the dance floor and he slowly follows along (and I mean slowly). That’s about it. Seriously. You try to avoid dancers with larger spotlights until yours gets big enough to attack them. These mechanics remind me of games like Solar 2 or Flow The difference being that those games don’t require you to take up most of the screen with your fat finger in front of what you’re trying to see and they didn’t have characters that move quite so slowly.

When you add it all up, the game offers so little in gameplay variety or any deeper strategy other than drag your finger to the enemies and bump into them as fast as possible. The choice to base this on Lumpy Space Prince is baffling, the ads are intrusive and make me want to stop playing even more than I already did. The biggest sin of all is that the audio for the game is a loud, annoying dance song that plays endlessly from the moment you start the app until you finally kill it. Do not download this game. LSP deserves better.