Remember back when Valve said they were going to make Portal 2 on PS3 the best console version of the game? Well, it sounds like they’re making good on that promise. In a press release early this morning, Valve announced the Steam-related features that will be coming to the PS3 version of Portal 2. One of the major highlights is cross-platform multiplayer gaming, meaning that PC and Mac Steam users will be able to play with/against their console loving friends… so long as their console of choice is the PS3. Other features include Steam Cloud support for saved games, cross platform chat, and a free Steam Play copy of Portal 2 for your PC or Mac. PS3 users will also have access to their full Steam friends list in-game. For all the official details and jargon, see the press release below.

From the Valve Press Release:

January 18, 2011 — Valve, creators of best-selling game franchises (such as Half-Life and Counter-Strike) and leading technologies (such as Steam and Source), today announced the Steam features shipping with the PlayStation 3 (PS3) version of Portal 2.

Marking the debut of Steam functioning on any next generation console, the features shipping in the PS3 version of Portal 2 include cross platform play (PC/Mac vs. PS3) for multiplayer games, persistent cloud-based storage of PS3 saved games, and cross platform chat (PC/Mac and PS3).

In addition, those who purchase Portal 2 for the PlayStation 3 may unlock a Steam Play (PC & Mac) copy of Portal 2 at no additional cost by linking their PSN and Steam accounts.

“We made a promise to gamers at E3 that Portal 2 for the PlayStation 3 would be the best console version of the product,” said Gabe Newell, co-founder and president of Valve. “Working together with Sony we have identified a set of features we believe are very compelling to gamers. We hope to expand upon the foundation being laid in Portal 2 with more Steam features and functionality in DLC and future content releases.”

“We designed the Portal 2 PS3 experience to be very straightforward for gamers,” said Josh Weier, project lead on Portal 2 at Valve. “PS3 gamers will be able to simply drop the Blu-Ray disc in the PS3, link to their Steam account from inside the game, and all their Steam friends (on PC and Mac) will be visible and accessible for chat and game invites.”

These features are made possible thru the use of Steam, Valve’s platform for the delivery and management of games and digital content. 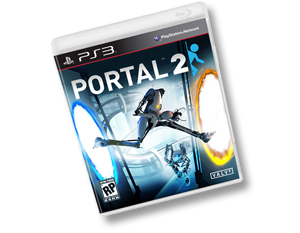 Portal 2 is due for release on the PlayStation 3, PC, Mac and Xbox 360 this April.