Have you been wondering when you’d finally get to play Ms. Splosion Man? Then let us be the bearers of excellent news! July 13 is the special day for all of us, but I guess we’re a few seconds behind the title of our article with the announcement.

Once again, Twisted Pixel has expressed their news in the form of a picture while simultaneously stealing the headline you know we all wanted to use. 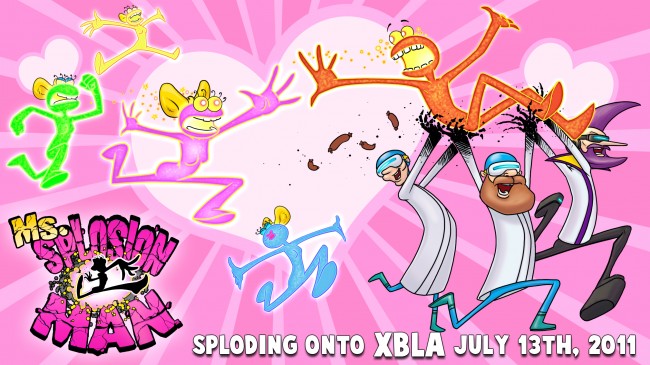 If press releases are more your thing, you can read that after the break.

﻿﻿Amid Uproar, Ms. Splosion Man Granted Her Release
Publicist Twisted Pixel Claims Her Destructive Days Are All Behind Her

June 22nd, 2011 – Austin, TX – Embattled socialite Ms. Splosion Man has been roundly
condemned by authorities for her destruction of property and abundant manslaughter charges,
but nevertheless remains hugely popular in the hearts of the people. They call her a freespirit
and the meat-bringer but Big Science insists she is a dangerous element getting special
treatment only because of her abundant celebrity. Everything will come to a head on July 13th,
when the highly anticipated followup from 2009’s Summer of Arcade hit title Splosion Man
splodes her way onto the Xbox LIVE® Arcade marketplace.
Boasting improvements to nearly every aspect of its gameplay, Ms. Splosion Man is a true
successor to her illustrious forebearer. Players can look forward to a host of new gameplay
mechanics, varying environments posing new unique challenges, totally revamped network
support, epic boss battles, original music, and plenty of the humor and charm that people have
come to expect from Twisted Pixel. Tons of unlockables throughout the game give players
a complete behind-the-scenes look at the game’s creation. “We are incredibly proud of Ms.
Splosion Man and feel like it is our best game to date. We are very excited to launch it this
summer on XBLA,” says Twisted Pixel CEO, Mike Wilford.
Featuring 50 all new single player levels, a 50 level multiplayer campaign and a bunch of
surprises to come, Ms. Splosion Man debuts this summer on Xbox LIVE Arcade, July 13th,
2011.