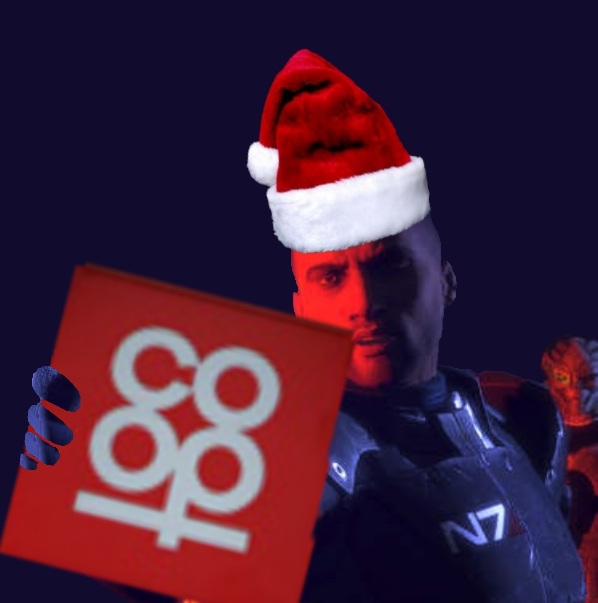 Shepard Claus brought to you by Mr. Chuck Marsh and my old blog Inverted Y Axis.

For a while now we’ve heard rumors of possible multiplayer in Mass Effect 3. This, of course, caused the internet to absolutely shit itself with anger and excitement in equal measure. That’s a lie. Anger always wins on the internet. Just ask angry people.

Then, Shepard Claus showed up…

Bioware announced yesterday that the only multiplayer you’ll be multiplaying come Mass Effect 3 time will be co-op. 4-player co-op to be exact (probably anything between 2 and 4… MAYBE). Bioware says that it will be separate from the single player, and that “Players can choose from a variety of classes and races, form an elite Special Forces squad, and combine their weapons, powers and abilities to devastating effect as they fight together to liberate key territories from enemy control.” My question is this: why the fuck would I create anything other than a team of Shepards since he is so clearly the baddest motherfucker in the universe? Furthermore, there was no mention of whether or not there would be any sexual interaction in said co-op mode. What is Bioware if not down with the space lovin’? The combination of romantic choices and Shepard clones brought up a lot more questions for me. So, I decided to go right to the source. Here is the email I sent to Bioware… PR… I guess? I’m not sure exactly where it went, but rest assured the following is in their hands:

Ok, since there was no mention of sexual interaction in the co-op mode, I’m just going to assume it exists since you guys are all about some space lovin’. So, if we were to create 4 Shepard clones in your co-op mode (because why would we make anything else when Shepard is the baddest motherfucker in the universe?), would sexual interaction between them be considered:

If this isn’t directed at the proper PR contact, please point me in the right direction.

You’ll notice some familiar italicization for effect. Right now we’re sitting on what I can only assume to be a giant “no comment” because they have absolutely not commented. Also, I like “Incesturbation” a lot more that “Masturcest”. What do you think? My friend Barry wanted me to ask them if they could just make another N7 shirt, but his request came moments too late to make it into the final email.