My roommate picked up a Wii U this week, and with it came a copy of Nintendo Land. As nearly all mini-game collections go there are a few games in Nintendo Land that work brilliantly, showing the heaps of potential that Nintendo’s new console has going for it, though there are others which are so bad the overall package might have benefited if they were left out. But forget all that! This isn’t a review, it’s a blog. So I’m going to tell you about the best stuff in Nintendo Land!

Undoubtedly, the most fun I had was with the Zelda mini-game titled The Legend of Zelda: Battle Quest. In it, one person used a controller with Wii Motion+ to swing their sword around, and the other uses the Wii U Gamepad to aim their bow and take the role of a supporting sniper. Swinging the sword around works the way you expected it to the first time you heard of the Wiimote. One-to-one movement and a simple the flick of your wrist causes your character to let out an corresponding slash, which looks and feels awesome. Foz and I would swap controllers every couple of missions and, to be honest, it didn’t matter which I used; both play styles were loads of fun! 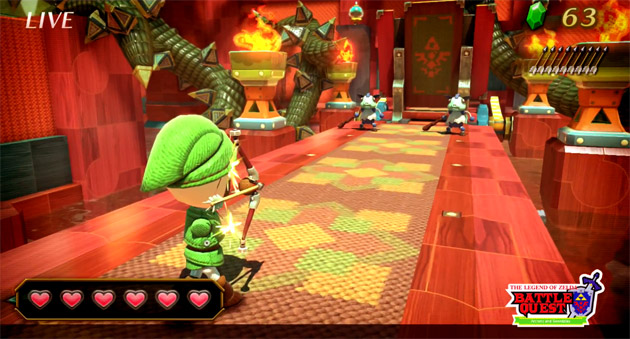 Calling Battle Quest a mini-game almost feels like I’m selling it short. After playing through every level, each more challenging and fun than the last, I found myself hoping that Nintendo sees that they have completely nailed both motion controls and co-op Zelda. I’m not even kidding when I say that I’d consider a full-blown Battle Quest adventure as a killer app and wouldn’t hesitate to buy a Wii U of my own to play it. Don’t get me wrong, this is an on-rails shooting/slashing gallery, but the level of polish on everything, the air-tight controls and extremely satisfying co-op has me begging for a more fleshed out version of this. Let people control where they walk and then you’ve got the framework for a perfect action adventure game on your hands.

My next favorite is Animal Crossing: Sweet Day. It’s so simple but that doesn’t mean it isn’t a blast to play. The more people you have in a match the more fun you’ll have. One person plays with the Wii U Gamepad and they control two guards with each analog stick. Your goal is to tackle the rest of the players 3 times before they can collect a certain amount of candies that are scattered around the map. The rest of the players use Wiimotes turned NES-style to control their Miis, collecting candy as fast as they can without getting hit by the guards.

I understand if it sounds too simple or uninteresting when I explain it, but take my word for it: if you play this game correctly there will be people shouting at the top of their lungs when the stakes are at their highest. And according to Fozzy, the stakes have NEVER been higher. Nintendo knows how to develop unique and fun games like no one else, and Animal Crossing: Sweet Day is a shining example of it.

Watch this and tell me you aren’t just dying to play Animal Crossing with 4 of your buddies.

There are other games on the disc that I enjoyed playing but they didn’t exactly blow my mind. Pikmin Adventure, surprisingly enough, is sort of a beat-em-up game, which is really weird but totally works. Metroid Blast looks great and on paper it should be a ton of fun but so far it seems like a standard shooting gallery set in a large arena. I hope there’s more to it because it sure looks great with that Tron aesthetic. Mario Chase is kind of fun, but a little exhausting. If you’re itching for a competitive mode you’d be better off playing Animal Crossing, honestly.

Unfortunately the worst titles happen to live in the single player section. Sure, I had some fun with Yoshi’s Fruit Cart, but it was the kind of fun you have on your phone for 5 minutes on the bus. I think Balloon Trip Breeze is probably the most impressive of the lot and even then I don’t have much to say about it. Kinda weak, Nintendo. But that’s just my opinion.

What did you guys think of Nintendo Land? Are your favorite mini-games completely different than mine? Let me know in the comments.