A few weeks ago Gabe convinced me to pick up Hell Yeah!: Wrath of the Dead Rabbit while it was on sale. It’s a title that I have always appreciated from a distance, looking at screen shots and the occasional trailer, but never anything further than that. Reading about the sheer amount of animation packed into every enemy, object, and environment had me interested, though. From what I had heard, Arkedo Studio took their budget and put it towards polishing every inch of Hell Yeah!, giving it the look of a beautiful side-scrolling cartoon.

The game feels like a 16-bit action title re-imagined for today: 90s ‘tude, but with an adult twist. Hell Yeah! is extremely violent, which shouldn’t be a surprise considering it takes place in Hell. You control Ash, a skeleton-rabbit and leader of the Underworld who is constantly picked on by his enemies for being naked. Apparently he has a fetish for rubber duckies and the paparazzo have exposed him by taking incriminating pictures of his hobby while in the bathtub. This kick-starts Ash’s journey to violently dispose of the monsters responsible for the pictures and anyone else who stands in his way. The game is as funny as it is absurd. 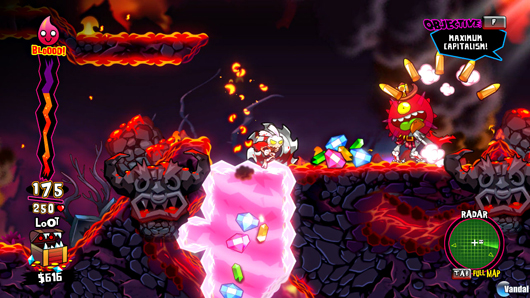 I’m only a few hours into Hell Yeah!, but I’ve been extremely impressed so far. The music is fantastic, the graphics rock, and the writing has given me a few chuckles. If there’s anything I have a problem with, it’s the controls. For the most part they work, but in order to shoot a weapon the right stick needs to be pressed in that direction, which is fine except when you have to jump and shoot – something that is becoming more and more common. It’s a poor design choice that could have easily been fixed by mapping jump to one of the shoulder buttons. Either way, I’m having fun, and if you’ll excuse me… I’m off to play some more!

« GoN Comic: The Best Thing Since…
We Play Primal Carnage »