Welcome to day number two of my Happy Halodays celebration. A new entry in the Halo universe is finally upon us, and I could not be more excited. I don’t claim to be any kind of Halo historian, but I thought it might be fun to take a little trip down my own personal Halo memory lane. I was going to run through all of the main games in one post, but that started to get super long. Instead, I’m going to make a post for each game. So, let’s continue.

It’s strange to me now to think of how quickly Halo went from an unknown to the brand that defined the Xbox. Halo 2 stood up on a pedestal, fully flaunting the newfound success of what was clearly now a franchise. The franchise as far as Microsoft was concerned. It dropped the need for a :subtitle and just let the name stand on its own.

I decided to go to the midnight launch for this release. I can remember my friend Josh and I standing in line in front of the GameStop at Barton Creek mall. We got there pretty early, so there was a lot of time to kill. I remember keeping an eye on my fantasy football matchup that week via a terrible flip phone (a game which I won, by the way). It was crowded. Far more crowded than any midnight release I’ve been to since the age of downloadable games and release day delivery from Amazon. It’s something I miss being able to participate in. Maybe I’m just not going to the right launch events. Anyway, once midnight hit, the line moved through the GameStop, I collected my copy, and Josh and I headed back to my apartment. Halo 2 offered split-screen co-op, so we played until it was obvious that making it to class in the morning was going to be rough. Worth it.

The box art was only marginally better: 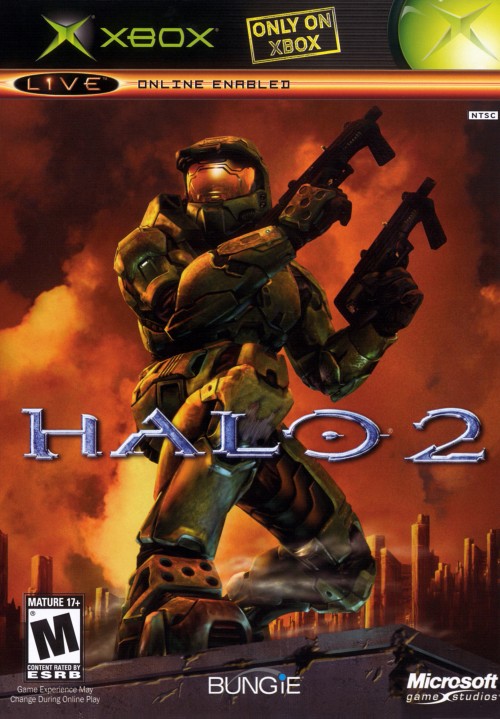 Halo 2 also gave us a deeper look into the culture of the Covenant. We learned a lot more about the Elites and even got to play as one in the form of the Arbiter. We found out that not everybody was on board with this “great journey” promised by the Covenant prophets. I remember how lonely and isolated, yet, dutiful it felt to be dropped off at a covenant rebel installation as the Arbiter, tasked with putting an end to the heresy. You’re an outcast who’s forced to run suicide missions as atonement for previous failures until you’re inevitably killed. Then, on top of all that, you get to see Elites and the Chief working together. It all takes some really interesting twists and made the Haloverse richer.

I haven’t forgotten that this is also the game where we run into Gravemind for the first time. I think the concept of a central intelligence guiding the flood is a good one. That said, they couldn’t have picked a stupider looking character model or chosen a more ridiculous way for the Master Chief to meet it.

The sequel was the first in the series to exist once Xbox Live was a real and established thing. As I mentioned above I was still in college at this point. I had a lot of close high school friends who had moved all over the state/country. This was a great way for us all to be able to hang out without having to be in the same place. The back-to-back couches and split screen televisions were replaced with cable modems and headsets. It was different, but it worked. The trash talk was still real, the jokes and laughter was still real, and the beers were still cold and shared from afar.

Halo 2‘s life cycle carried over into my post-college days as well. There were many nights where my friends and I would hop into a chat party (in-game, party chat wasn’t a feature of Live yet), flip the TV input over to the cable box, and watch some kind of sporting event. Then during breaks in the action, we’d hop back over to the Xbox and get in a few matches. It was another fun way to pass time with friends who lived far away. Those seem to be the memories I have of Halo 2 the most – keeping in touch with friends who lived all over the place. No matter where we were, we could always come together in the matchmaking lobby.

Be sure to come back tomorrow as I get into memories of Halo 3. We’ll finish the blog! But then start it back up because there’s Halo 4.