There have been a lot of signs up for these standalone Emergency Rooms that offer the chance to register online before you come. The whole idea really seems to be contradictory to the idea of an emergency. I guess they’re places for things that aren’t super serious? Do I no longer call my doctor? I suppose there’s always middle ground available between any two points.

Sunday night our mascot, Harris Foster, jovially posted an image of an inappropriate avatar in COD: Black Ops 2 on Twitter. He also tagged Treyarch in the post. A gentleman (we’ll call him Rich) who apparently just trolls Treyarch’s twitter feed decided to “call out” Harris. I put that in quotes because I really don’t know what his end goal was. He argued that since Harris was under 18 (he’s not) he was somehow violating the rules of the game and therefore shouldn’t be pointing out other peoples’ rule breaking. This bothered me on several points.

He continued to persist that Harris was underage. So, I started to doubt myself. Was Harris actually 17… or worse, 16? I had to investigate. 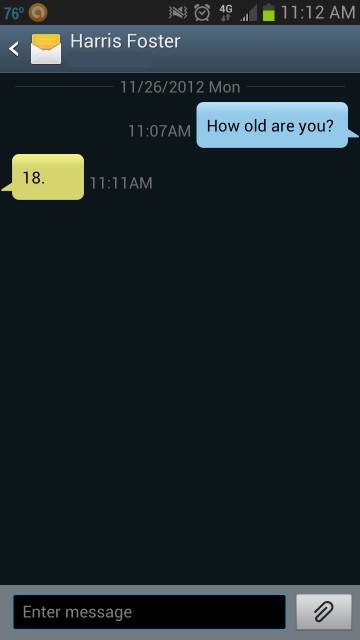 I know the internet is full of idiots, and we should never engage them. However, sometimes it’s just fun to do.