As I sit here writing this, it’s approximately 12 hours since Extra Life ended. Most of the event still seems like a blur. I spent it on my couch in a Skype call with Javi for most of the day. Later in the evening our unpaid intern, Gabe, and our friend, Devon, joined the call and the gaming. It was really nice of them to be there considering I was the only one actually participating in Extra Life. In a way you could say they did their part, supporting the supporters. They certainly helped me make it through the longest and most grueling parts of the event, the wee hours of the night/morning.

For those of you who don’t know, Extra Life is a 24 hour gaming event that benefits the Children’s Miracle Network Hospitals. Participants sign up, get sponsors, then we all play games for 24 hours in the spirit of helping sick kids. I managed to raise $850.07, and that’s way more than I anticipated. Thank you to everybody who donated. You helped Extra Life raise over $1,100,000 for the Children’s Miracle Network, a new Extra Life record. That number is the best estimate we have right now, because it broke their counter. The damn thing didn’t even put a comma after the first one because they never imagined there would be this level of support for the event. I’m really impressed by all of you. Just like Child’s Play, the annual charity run by Penny Arcade, this community has once again pulled together and made an enormous difference. You guys really are all amazing.

So, now that I have you here, I wanted to break down a little big of how the day went. I had a lot of grand ideas about working through a lot of my backlog, and in a way I did, but just with one game. I’ll get to that in a minute.

First up was Orcs Must Die. I was never really a fan of traditional tower defense games. I mean, they’re alright. I don’t dislike tower defense games. They’ve just never really been something that grabbed me for any amount of time. So, I’m really not sure what it is about the recent third person tower defense games that have changed that for me. I absolutely loved Trenched, and now here comes Orcs Must Die. I love walking around the environment before a round starts and seeing how I can use certain traps to my advantage… how I can bottleneck the enemies into a gauntlet of death. It’s fun to look at whatever you unlocked after the previous round and see how the designers may have intended you to use it. Plus, man, watching a crowd of Orcs enthusiastically charge for their target, a rift into the world you’re sworn to protect, only to be impaled en masse by the giant wall of arrows you placed along their path. The game is just super satisfying when you’re successful, and makes you want to figure out how it works in your failures. The only disappointing thing is a lack of co-op. Often the game offers multiple paths to the rift, but nerfs the attacks patterns to accommodate a single player. This is fine if you chose to play single player, but it would be nice to see them give the option for ramped up difficulty while you and a friend took on the Orc horde.

Oh, somewhere in there I also made a run to Chick-fil-a for breakfast. Best. Chicken. Biscuits. Ever.

Oh and at 2:30 Texas vs. Oklahoma State started. I’m a Texas grad, so I had to support my ‘Horns. They lost. I wasn’t surprised. But, I had to make sure that the game was watchable while I gamed. So, this was my setup throughout the day. 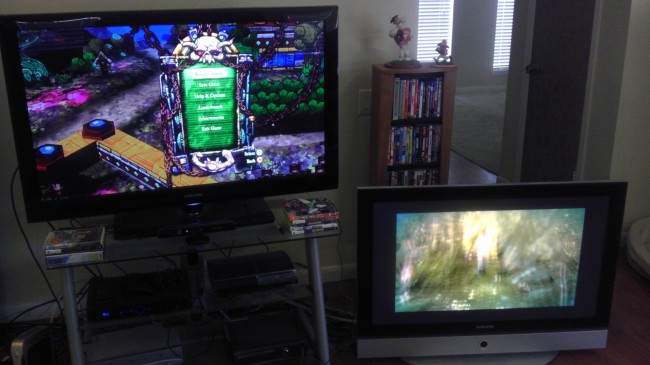 Eventually I hit a snag in Orcs Must Die, and rather than push on, I decided it would be a good time to switch games. I mean, I had a ton of time ahead of me. So, I moved on to The Baconing. At this point I had probably only spent 1-2 hours with The Baconing, and I figured this was a good time to make some more progress. That “progress” lasted the next 11 hours until I had completed the game. I’m not sure what me push on that long. Typically no game can hold me for that kind of rally. Maybe it was just the knowledge that I had a long day ahead of me. Either way, I played the game to completion is one sitting. I really dug the new environments and scenarios they set up. Hot Head has always had a sense of humor and it continues to show in this game. I mean, it’s still just more Deathspank. If you went in looking for anything ground breaking, you were likely disappointed. It was very much just the same old formula. But, for me, that was ok. It was what I wanted.

That being said. I think I’m ok without Deathspank for a while. Do your thing Hot Head. Give us some new games. Bring Deathspank back in a year or two when I’m ready… FOR JUSTICE!

I think I just sat there for a bit. I had just basically played through an entire game. It was hard to imagine what I would do next. So, I did what any lost gamer would do: I grabbed my tablet and fired up Angry Birds. I’m not sure how long this lasted. I think I drank a 5 Hour Energy as well. Things got a bit blurry.

Fast forward to about 2:30 in the morning. I’m playing H.A.W.X 2, a game (a gift) that had been sitting unopened since it’s launch. My friends and I tend to send each other “mediocre” to “bad” games as a joke depending on our particular tastes. I happen to love mech games and flight sims. So, yeah, there was H.A.W.X. 2.

It was during this time that something magical happened. We finally, FINALLY, started our new podcast idea called “Dumbass.” It’s going to be more of a comedy oriented podcast that is loosely related to video games. The premise is the strange conversations that happen between us as we play games late at night (or really just any time). It might already be up by the time you read this. I hope you like it, and I hope you write in and drop some topics on us. It’s full of unibrow humor. I apologize for my miniscule input during the podcast. I was the only one who had been up for 19 hours playing video games by that point.

The rest of the night can be summed up pretty quickly. Once we finished recording I played some more H.A.W.X. 2 and then resorted to Angry Birds once again. I recall listening to Javi watch Man vs. Food. I know that Javi and I chanted “Guacamole, guacamole, guacamole….” repeatedly in jest of the folks who actually step out to watch a live recording of the show. They were really doing that. Very enthusiastic people. Then, around 7:15 CT, Javi passed out. I was still tossing very angry little birds at pig-constructed structures. I had about 45 minutes left. So, I shut down the tablet. Let my dog out, fed him breakfast, and then took care of a few household things. I would have liked to tweet something profound at 8. But honestly, I felt like garbage, and anything I could have typed would have reflected that. So, I just went to bed. It was an epic night and I thank everybody who participated. This includes my Skype partners, my twitter followers and friends, and most of all, everybody who donated. You guys really are the best, and I’m blessed to be associated with you.