When you have a holiday season that’s packed to the brim with AAA offerings it’s always easy to forget about the year’s early releases. Games like Killzone 3, Dead Space 2, and inFamous 2 seem to have been forgotten by the mainstream when it came to the Game of the Year talk. Personally I would argue that my time with those games was more enjoyable than anything I played in the final months of last year. Unfortunately only one game can earn the oh-so-unimportant spot at the top of my list for “Best game of 2011”. Honestly I am just as surprised as you to hear that this year my favorite game was Little Big Planet 2.

For a sequel to blow me away it needs to step up its game and do things that its predecessor hinted at but just fell short of. Uncharted 2 did this with more diverse environments and gameplay; Dead Space 2 did it by cutting the fat and pushing you forward through intense action set pieces. These enhancements were to be expected when the studios went back for round 2, but with Little Big Planet I feel like Media Molecule went above and beyond what fans of the first had in mind.

I was a huge fan of the first game and played it to death. Beating the later levels without dying often took dozens of attempts, and searching every nook and cranny of each level in order to get 100% of the stickers, materials, and items took weeks. But I loved every second of it and dammit, I was ready for more. Not only did LBP2 not disappoint, it made sure every level had a different gadget, gimmick, or visual aesthetic to ensure a memorable experience. 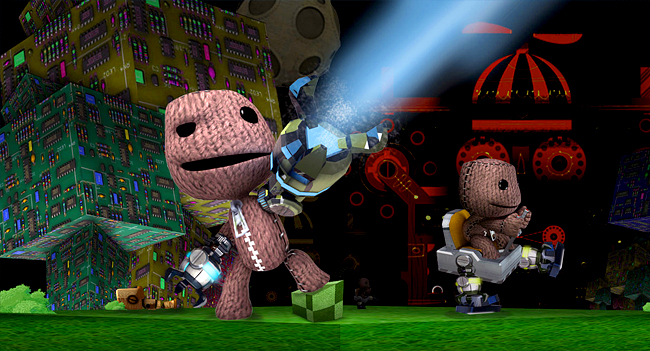 The inclusion of gadgets for Sackboy to mess with is a huge reason this game is so fun. The Grappling Hook, Grabinator, Cakinator, and Bounce Pads felt natural, but like any great game, you can improve your skills and master it. Especially with the Grappling Hook. Over time I learned exactly how momentum worked in LBP2 and was able to launch myself in any direction by simply letting go and grabbing on at the right moment. It’s so much fun!

Backwards compatibility with every user created level and all the DLC from the first game must have been a daunting task considering the bump in graphics and enhanced physics, but they pulled it off and it’s greatly appreciated. Speaking of DLC, it seems like every company under the sun has jumped on board, with costumes ranging from Disney’s The Incredibles to the bizarre inclusion of every character from The Watchmen. There’s even been whole level packs dedicated to Metal Gear Solid and Pirates of the Caribbean. With all these new outfits comes even more customization. You can mix and match pieces of whatever costume you like to create your perfect Sackboy. The sheer amount of variety in Little Big Planet seems endless from the get-go, but if you’re just dying without an official Spider-man outfit, it’s always there for you to buy. (lord knows I did)

Much like the first game, what I found most promising was the user created content. Little Big Planet 2 has a much more streamlined way to search for levels and make sure you filter out all the crap. You can organize levels by how people have described it, whether it uses your favorite gadget, by which game it’s from, by name, by rating, by amount of hearts, and lots more. This means you have virtually any experience you can imagine at your fingertips. It’s just up to you to find it.

Given the creator tools that Media Molecule has added to the game, anything is possible. If you have the drive and the will to build your dream game, Little Big Planet gives you the tools to make it real. With the Controlinator you can now wire anything to the PS3 controller, allowing you to control whatever is on screen instead of Sackboy himself. That opens up a whole new world of game development for creators.

I remember the first trailer for LBP2. It claimed that building levels was just the beginning and now you can build your own games. Not just platformers, but shooters, racers, adventure games, puzzle games, and anything else you could imagine. I was skeptical, but had faith. Especially after they delivered on all the groundbreaking network connectivity that LBP1 promised. Sure enough the sequel delivered. Right now you can find all sorts of crazy levels that look like they have nothing to do with Little Big Planet and I think that is amazing!

Games like Little Big Planet 2 don’t come along too often. In fact I don’t think there’s anything like it. The production value is through the roof with excellent music, charming voice acting, solid gameplay, and multiplayer that you can hop in and out of by just pressing start. The content on the disk is already enough for me to recommend you pick it up, but even with out all that you literally have a never ending stream of content to find, conquer, and create. With that in mind, Little Big Planet 2 is an easy choice for my game of the year.